I spent a lot of time thinking about this today.  Of course, there are lots of things I am thankful for, but I wanted to name something less tangible.  Thankful that Spring is coming and the weather is turning nice.  Thankful that Winter is almost over and that it wasn’t as bad this year as it’s been in years past.  Thankful for all the blessings we have in our life – namely our children and our marriage.

But I realized that one of the things I’m thankful for is the opportunity to give back.  There have been plenty of moments in our life that we’ve not been in a position to do that.  Now, we are, and it feels really good to find charities we can support.  It’s not much, but it’s something.  We are even kicking around the idea of committing to a “save the children” type of charity, scary as that is.  We are all too familiar with how tenuous life can be and how things can change in an instant, so being able to commit to something like that is a huge deal for us, not just financially, but emotionally too.

So today I am thankful to give.  God has blessed us, brought us to this place, and to be able to share that, even a little, is a beautiful thing.

How about you?  What are you thankful for today? 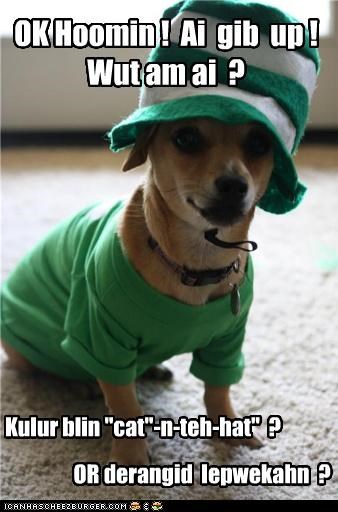 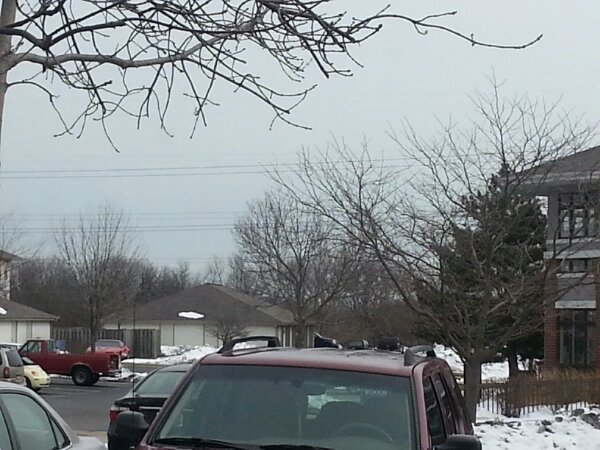 I realized the other day that it’s been a while since I’ve picked up any kind of cold medicine for the kids.  So I got a bottle of cough medicine to have on hand, because when my kids get sick, it tends to settle into a cough.  I figured it would be a good time to clean out the medicine cabinet too, so I started checking expiration dates.  The most recent ones expired in 2010, and a couple even went as far back as 2006.

It struck me how much of a blessing that really is.  Medicine is truly one of those “better to have it and not need it, than need it and not have it,” sort of things.  My kids have not been sick enough to go through all the medicine I had on hand.  Sure, they’ve had the occasional cold or cough, but nothing that’s really hung on for a long time.  We’re so lucky, so blessed, to be able to throw away medicine.

I certainly can’t take any credit for it.  I don’t do anything special to keep the house germ free, or things like that.  They just don’t get sick very often.

So that is my thankfulness for this month, this month during the proverbial cold and flu season.  🙂 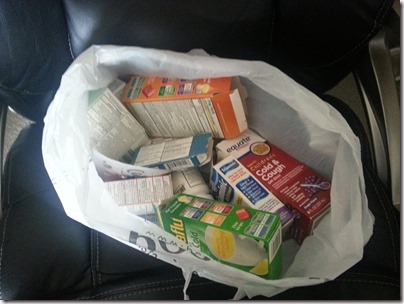 [All the meds that went into the trash.]

Do you have something you’re thankful for today?

There is so much to be thankful for!  This past month was wonderful, what with Christmas and my beloved being on vacation, and the kids being on vacation.  Even the weather has been kind of nice, considering it’s January in Chicagoland.  Well, it’s January everywhere, heh, but usually it’s mind-bendingly cold this time of year but this year it’s been pretty decent, and almost no snow, woo!

Today, I want to focus my thankfulness on a friend of mine.  I’ve known her … wow, will it really be 28 years this year?!  She’s loyal and generous by nature and has been a blessing to me.  We’re complete opposites, personality-wise, which has led to a conflict or 2 in our relationship but we’ve managed to overcome those.  :)  She’s on my heart in a major way because things are not going so well for her right now, especially on the health front.  She’s facing some potentially serious health issues, and her doctor wants her in for more tests.  She had to have surgery a couple of years ago, and it’s looking like she might be experiencing a recurrence.  So, she’s scared, and I’m scared for her.  She needs a blanket of blessing and if you’re the praying type, if you’d send some her way, they sure would be appreciated.

We don’t often find such faithful friends in our lives.  Haven’t we all experienced the back-stabbing kind, or the fair-weather kind?  I used to have a little joke that the best friends were the foul-weather kind, the ones who would stick by you even when life had turned against you.  I always wanted to not just have friends like that, but be a friend like that.  My friend is a friend like that, and I’m so thankful to have her in my life. 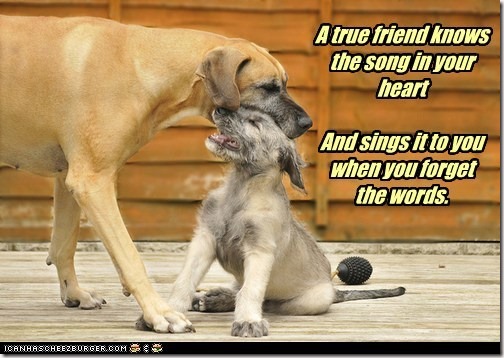 Clipped from A True Friend – Cheezburger

Posted on November 8, 2012 by DarcsFalcon

I have a lot to be thankful for this month.  I mean, a lot.  This time 2 years ago things looked pretty scary and bleak, and things have definitely changed since then.

Thankful that this weekend we were able to get some kick-A new phones, AND, oh my gosh we have high speed Internet, too!  I was so excited I kept doing the speedtest.com thing over and over just to watch the little dial thing move up.  :)  My download speeds are more than 10 times, heck, almost 20 times better than what they were.  Hallelujah!

All that was in honor of mine and Darc’s anniversary this week.  After so many years of keeping a tight rein on things, we decided to splurge a little, so we’re covered for all anniversaries and Christmases from now through 2016 easy, lol.  🙂

Thankful for a blessed marriage and a wonderfully loving husband.

Thankful too, for kids who shout, “Salmon!” when I ask them what they want for Thanksgiving.  MY kids actually asked for fish and not chicken nuggets!

Thankful for kids who have worked so hard and diligently that they will be finished with their school year 10 days early, so we will have the entire month of December OFF, and then-some!

So many little things have happened, things that seemed to be going wrong, that at the last minute were righted so that all was well in the end.

Thankful that all the presents I ordered for the kids for Christmas arrived in less than a week.  I’ve even managed to get half of them wrapped already.

Thankful that my daughter was able to go trick-or-treating last weekend, when it seemed like she wasn’t going to be able to.  Thankful too that she still has most of her candy, lol.  Usually it’s gone by now.

Thankful for the joy that’s been filling me lately.  I feel like a bathtub that’s had too much bubble bath poured in and the stuff just keeps spilling out all over the place.  It’s a nice feeling.  🙂

Thankful for the shooting star I saw last week, that hung there over our heads for what seemed like an eternity, like a little sparkling kiss from God. 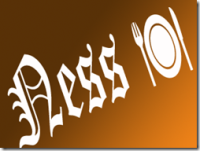 It’s kind of a military week for me.  There was a lot of fly-over activity in the days preceding the 11th.  It happened last year too, so I’ve come to figure it’s just something the Navy base does this time of year.  I spent a lot of time over on Pinterest looking at a bunch of military pictures for one of my boards there and that kind of stuff always makes my heart swell with pride.  Then I caught a link to an amazing video in my Reader about one of our fighter squadrons.  My kids loved it too, so I was telling them about the Blue Angels and naturally I had to find a video for that too.  They can’t wait to see them in real life now.  :)  Yay!

I could have spent all day watching the “fly-boys” do their thing.

I didn’t grow up military, and I’m not married to a military man, and no one in my family is military anymore, so I’m not sure where this love of it comes from.  I mean, it’s not like I was bombarded with military stuff at any point in my life.  But my love for it is there.  And I am profoundly grateful for all they do for us.  For me.  For my children.  Without them, and their long history going back to the Revolutionary War, we would not be Americans today.  How in the world could I not be grateful for a huge part of my very identity?

So that’s my thankfulness for this month.  The United States Military.

It’s been pretty dry this summer, and for here, that’s saying a lot.  Usually we get rain every few days in the summer, but this year, not so much.  I know there are farmers out there with suffering and dying crops and that’s never a good thing.

Today, it’s pouring.  Thunder and lightning and rain coming down in torrents so hard you can barely see across the street.  There will probably be some minor flooding in the rivers in our area but overall, the earth will drink this stuff up like a drunken sailor.

Rain.  Beautiful, glorious rain.  I once had a woman describe it to me as liquid sunshine.  How perfect is that?

How about you?  What are you thankful for?

See that box right there?  –>>  I am doggone grateful for that wonderful box.  Many have been the times in my life when I didn’t have such a box.  An amazing, fantastical, life-altering box.  Of course, it’s a central air conditioning unit.  But you knew that.

Sometimes I think about when no such thing existed – even as little as one century ago, such a thing would have been considered science fiction, I’m sure.  Now, many homes and cars have them.  I think in some places they are as necessary as heaters.  Certainly for some folks they’re necessary, as was shown in the 500+ heat-related deaths in Chicago during a 1995 heat wave.

I know that neither Darc nor myself deal well with heat.  We just can’t physically tolerate it.  Some folks thrive like a desert cactus, but not us.

So I am profoundly thankful for air conditioning.  We do indeed live in a wonderful time.

What are you grateful for? 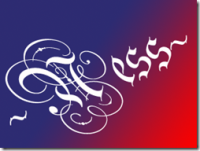 What did you say?

I Love Me Some Him

I Love Me Some Me

I Love Me Some Poetry

I Love Me Some Them